One of the strangest days was the morning I heard of Alexander McQueen’s death. It was strange because in the moments of that morning I was in a state of dark emotion that made his suicide even more eerie and oddly poignant.

Lately, I have been watching his fashion shows again, the doll-like models whose eyes are made up to appear blank and lifeless. In addition to this, McQueen‘s inspiration from the Surrealist artists of the early twentieth century is evident. To these male surrealist artists, women seemed very much inanimate objects there for the gaze and exploit of men. 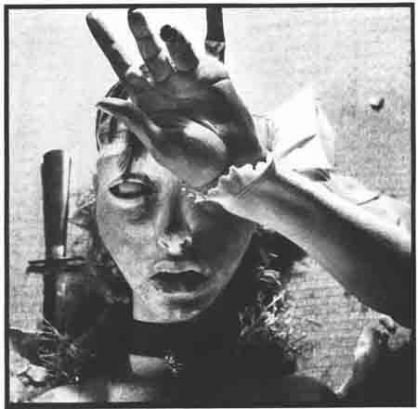 A detail of a La Poupee by Hans Bellmer

But McQueen had a sensitivity that these men did not possess, the exception perhaps being puppet and dollmaker artist, Hans Bellmer.

There needs to be a mention, too, of Sybarites, dolls made by Charles Fegen and Desmond Lingard. These are resin dolls that absolutely mirror the models who move languidly about the catwalk during a McQueen show. 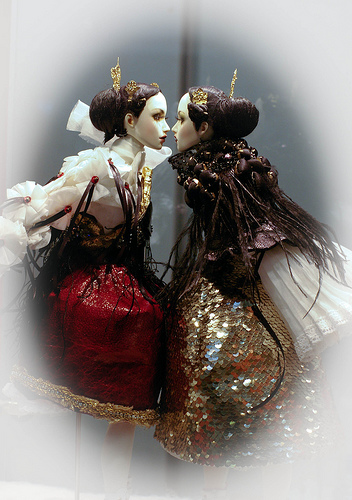 A detail of the "Resurrections" of the Sybarites

Compare these couture dolls to a model in one of McQueen’s theatrical runway shows. The women in the video, particularly the one at the end who is being created by robots, exemplify doll-like marionettes being controlled by someone or something just out of view. The woman in the final moments of this video rotates as if she is not a woman of flesh and blood, but a doll twirling for our entertainment and gazes as if she is a dancer in a music box.

McQueen’s use of women as puppets, dolls, mannequins, and eerie automatons is beautiful, however. His sensitivity is palpable, his need to show the fairy tales in art and life no doubt the main impetus for his fantastical fashion and  runway shows.

He was a great puppeteer. McQueen danced us into the 21st century only to leave us soon into our new century for the true otherworldly space that eventually wooed him more than anything on our earth.

We are left with a beauty that is discomforting and strange, but something constantly appealing, timeless. This puppet-master with great empathy will live in our dreams, even, I would guess, in the dreams of dolls.