I have always had a deep admiration and love for artist, Laurie Simmons and what I am seeing of her show that was on view at Salon 94 only makes me admire and love her more. This exhibit, Kigurumi, Dollers and How We See, documents (beautifully as Simmons always does) the phenomenon of Kigurumi, or, “Dolling.” This is part of a cosplay subculture where participants wear full-body and head “skins” to become dolls, to become another, a fantasy, even another gender. It takes the “walk a day in another’s shoes” sentiment to a whole new level. You are not merely in disguise, you are sheathed in another skin, quite literally. 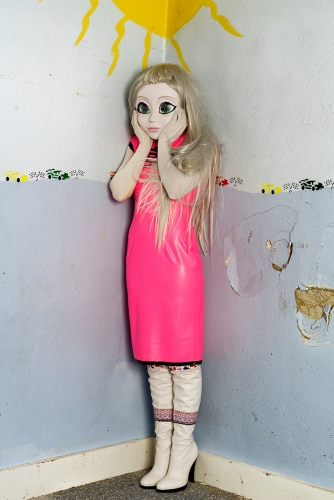 Very unfortunately, I was not able to attend the Salon 94 exhibition, but I have had the immense pleasure of seeing her large and all-consuming photographs of dolls, puppets, ventriloquists, and domestic vignettes in dollhouses many times. Her work takes my breath away.

The piece pictured above, Blonde / Pink Dress / Standing Corner is one such piece that leaves me breathless. The colors interact so actively and they wholly enliven, further bringing this “doll” to pulsating vitality. The disrepair and dirt of the walls and floorboards behind her is a stark juxtaposition to the plasticized perfection of the doll. As if it say, “Oh, dear!” the doll stands in the corner. Has she misbehaved? Did she mess up her backdrop? Is she being cornered? There are so many ways to view this composition … I feel it is actually endless. But one thing is for certain: something is amiss, it is not a fairy tale even though it may be a kind of attempt for one …

Although this doll is an alive, breathing human with blood flowing, there is always a hesitation to believe it is indeed real. Simmons says of her work, “My concern was to tell the most realistic lie I could.” Her work possesses a heightened realism while a viewer may feel as if there is this chance a coy little lie is being told straight to their face.

They are photographs, after all.

Even in an age of PhotoShop, knowing something is a photograph, a document of an image, an action within a moment makes us believe in it. We buy the “lie” if one is in fact being told. In this, too, reality itself is being blurred and played with, and it tantalizes. But this masking one identity to become a whole other goes beyond those who attend Anime and Manga conventions. 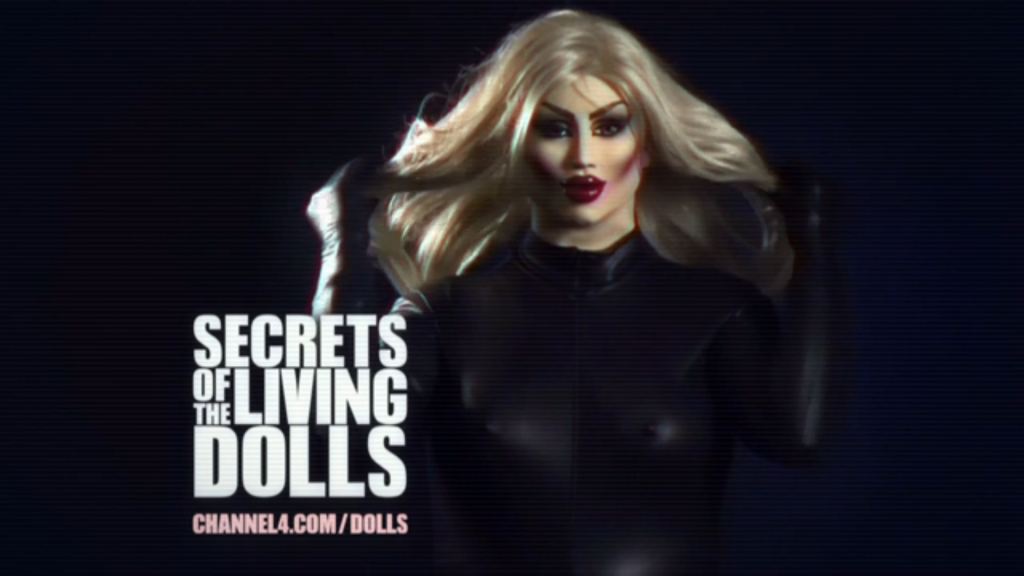 Secrets of the Living Dolls

The BBC documentary, Secrets of the Living Dolls, shows us that this is a lifestyle men around the world share and  love to do. I was able to watch most of this documentary when it was on YouTube (sadly, it has been removed) and only men participated in this particular kind of masking. And they, too, have a convention. It is called the Rubber Doll World Rendezvous.

Happiness is often challenging to find, so when those things, people, and drives make one happy, one should grab it like lungs grabbing oxygen. Beyond this, no one should be judged when this happiness is found and coveted and locked down … if anything, those who find and possess such happiness are heroes deserving of admiration, not judgment or hate. 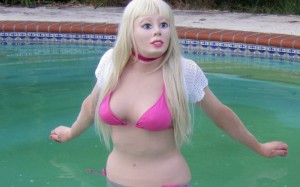 from Secrets of the Living Dolls

Secrets of the Living Dolls is a BBC documentary about masking / rubber dolling in the lives of several men and how the demand for Fem Skin is an ever-increasing business for a Florida family who make the skins themselves, as a family. The whole feel and the overall idea of masking as shown in this documentary is familial: the masking community, a vibrant one online, as well as the family whose business it is to create these skins for people all over the world.

Throughout the documentary, many of these men “come out” to their families about their masking, some go out in public, and some keep it private. The Rubber Doll World Rendezvous is an occasion for these men to be completely laid bare since they are among one another. They are meeting, mask to mask, fellow maskers they may have only ever spoken to online. Watching them meet one another is truly moving and one of the highlights of Secrets of the Living Dolls.

In Part Two, I will bring in a lot of my own experience with changing into another person through dress up as a child. I will be using the play technique theories and projective identification theories of Melanie Klein. Thinking back on these important moments in my childhood gives me a close understanding, I think, of dolling and masking. I know well the excitement of becoming someone else in dress-up play (only I was wearing costume jewelry and polyester satin, not rubber skins). The idea of personae fascinates me as well and I believe it is very much part of this play.

For now, give Secrets of the Living Dolls a look … there is an excerpt on Huffington Post here. There are also many videos of kigurumi, or dolling, on YouTube including this one. Until Part Two, dearest readers …

In a recent dream, a man who looked very, very old … hundreds of years old … said to me: “Hey, dollface.” I love the word, and I knew something was about to be born of this word, from noticing the connotative beauty of it. This is a loaded word. Dollface. The word conjures the […]

I don’t clearly recall the first time I discovered the artist, Hans Bellmer, but I believe, hazily, that it was in a women’s studies class while I worked on my Master of Fine Arts in poetry. I do recall becoming completely taken with him: imagining him alive, imagining him living daily life as a man, […]

We Lost Many Dolls* This Week

It has been a sad week for art and poetry with the deaths of poet Wislawa Szymborska (88); the last living Surrealist poet and artist, Dorothea Tanning (101); and the pioneering contemporary artist, Mike Kelley (57). Wislawa Szymborska leaves us her poems. She wrote one of my favorite poems of all time, “In Praise of […]

Little-Known Lester Gaba and His Gal

In 1932, Lester Gaba said he packed “a clean shirt and one of my soap sculptures” and headed from Chicago to New York City. He would become a little-known sculptor, seeming to be known and famous only during his own time after he created mannequins for the likes of Saks Fifth Avenue in 1930s New […]

I went to my hometown of Youngstown, Ohio for the Labor Day weekend. Yesterday I went into one of Ohio’s random gems — Marc’s. This is a store like no other; it is part grocery, part general store. They do not accept credit cards to keep the prices down (and they do just that) and […]

Warning Us of Our Human Behaviors: Two Wexner Center Exhibitions

The first thing a visitor to the Wexner Center saw up through July 31, 2011, was a sign by the ticket desk warning us of the shock therein, the little trinkets of shock and awe that would overtake us in the galleries below us. The curation of all of the shows I have had the […]

For the last two days, I have been watching more episodes of A&E’s Hoarders than I should simply because it tears deeply at me. I grew up giving lives to inanimate objects — dolls, Barbies, action figures, teddy bears. Now, as an adult seeing inanimates, knowing of course they are not alive themselves, I still […]

Red Wine and a Beheading: Oskar Kokoschka and His Life-Sized Doll

Oskar Kokoschka was a Renaissance man with a pulpy, pulsing passion running through his veins. His passion seems to have been both an intense blessing and a curse. One evening, with red wine overpowering him, Kokoschka beheaded the life-sized doll that could never replace his lost love, Alma Mahler. After a fiery relationship with Mahler, […]

Artist Jessica Harrison works in a place where most of us would be afraid to even look. But the result of her labor forces us to gaze into the darkness as if  into a  frozen-in-time scene of the macabre, a little fantasy place of dark dreams like tiny sparks of stars. My maternal grandmother, Alice […]